“Then the kingdom and dominion, and the greatness of the kingdoms under the whole heaven, shall be given to the people, the saints of the Most High. His kingdom is an everlasting kingdom, and all dominions shall serve and obey Him.” Daniel 7:27

The latter half of the book of Daniel tells us of the spiritual conflict between Christ and Satan and how it impacts us on earth. It is a message of hope to God’s people for it assures us that God will deliver His people in the midst of oppression. It calls us to endure with perseverance for the coming of God’s everlasting Kingdom is certain.

Satan has destroyed the human race by the Fall. The Gospel is the answer to the great controversy. By His death and resurrection, Messiah the Prince has put an end to sin, iniquity and transgression and brought in everlasting righteousness (Daniel 9:24). He has ascended on high and anointed the Heavenly Sanctuary, where He is the High Priest who ever lives to make intercession for us. At the Judgment, all who believe in Him will not be condemned (John 3:17, 18; 5:24). He will give judgment in favour of the saints and set up His everlasting kingdom (Daniel 7:21-27). The rebel Antichrist and his kingdom will be destroyed forever.

For a Christian reader, “a true understanding of Bible prophecies reveals the gospel teaching that the abiding Presence of the Saviour affords protection and deliverance from hostile foes: victory is assured through the indwelling Spirit of God.” CF Keil

In the first year of Belshazzar king of Babylon Daniel had a dream and visions of his head upon his bed: then he wrote the dream, and told the sum of the matters.

Chapter 7 begins the account of Daniel’s visions and prophecies. In chapter 2 we saw the image of four metals symbolizing the four great world empires from Daniel’s day to the end of time; in this chapter we have four beasts that represent the same kingdoms in more detail.

Daniel spoke and said, I saw in my vision by night, and, behold, the four winds of the heaven strove upon the great sea.

And four great beasts came up from the sea, diverse one from another.

The “beasts” here represent the world powers, in their beast-like, grovelling character. They are ‘bestial’, from below, while God’s kingdom is from above.

Later, this nation ceased to expand and conquer, represented by the wings being “plucked” off.

And behold another beast, a second, like to a bear, and it raised up itself on one side, and it had three ribs in the mouth of it between the teeth of it: and they said thus unto it, Arise, devour much flesh.

The next kingdom, corresponding to the chest and arms of silver from the image of Daniel 2, is Medo-Persia. Persia was dominant over Media; which is represented by the “bear” “raise up” “on one side” The “three ribs” in the bear’s mouth likely represent the major kingdoms which Medo-Persia conquered—Babylon, Lydia (in Turkey), and Egypt. At the height of its power this empire has conquered more than six times as much land as had its predecessor Babylon. It did “devour much flesh.”

After this I beheld, and lo another, like a leopard, which had upon the back of it four wings of a fowl; the beast had also four heads; and dominion was given to it.

Medo-Persia was defeated by Macedonian Greece, represented as a “leopard” with “four heads” and “four wings.” The “four wings” represent unprecedented swiftness. See Habakkuk 1:6. The conquests of Macedonian Greece under Alexander the Great were more rapid than even those of Babylon. In just three short years, from 334-331 BC, he conquered the entire Persian Empire. The leopard is more agile and swift than a lion or bear, yet more frail. Alexander died in 323 BC at the age of thirty-two. His four strongest generals (Cassander, Lysimachus, Ptolemy, and Seleucas), divided the kingdom amongst themselves, symbolized by the leopard’s “four heads.”

After this I saw in the night visions, and behold a fourth beast, dreadful and terrible, and strong exceedingly; and it had great iron teeth: it devoured and brake in pieces, and stamped the residue with the feet of it: and it was diverse from all the beasts that were before it; and it had ten horns.

The previous empires were represented by some of the most ferocious animals of prey; but this “beast” is represented by a terrible monster. This is a fitting figure of the Roman Empire which dominated the world with its iron legions. The “iron teeth” of this monster give it a direct parallel to the iron in the image in Daniel 2:40.

It is in the fourth beast that the world power manifests fully its God-opposing nature. Its ten horns are ten kings (Daniel 7:24)

I considered the horns, and, behold, there came up among them another little horn, before whom there were three of the first horns plucked up by the roots: and, behold, in this horn were eyes like the eyes of man, and a mouth speaking great things.

In the king symbolized by “the little horn,” the God-opposing,. haughty spirit of the world, represented by the fourth monarchy, finds its full development.

Eyes express arrogance 9Isaiah 19;12) and intelligence (Ezekiel 1:18); so (Genesis 3:5 ) the serpent’s promise was, man’s “eyes should be opened,” if he would but rebel against God. A mouth speaking great things refers to heart and mouth blaspheming God – offering the world a counterfeit of the blessings Christ offers.

The little horn as an extension of pagan Rome but is different. While the first three kingdoms demonstrated pride which led to their ultimate downfall, the little horn opposes God both politically and spiritually.

Let no one deceive you by any means; for that Day will not come unless the falling away comes first, and the man of sin is revealed, the son of perdition, who opposes and exalts himself above all that is called God or that is worshiped, so that he sits as God in the temple of God, showing himself that he is God. 2 Thessalonians 2:3, 4

Below is a table from Clifford Goldstein’s www.1844madesimple.org 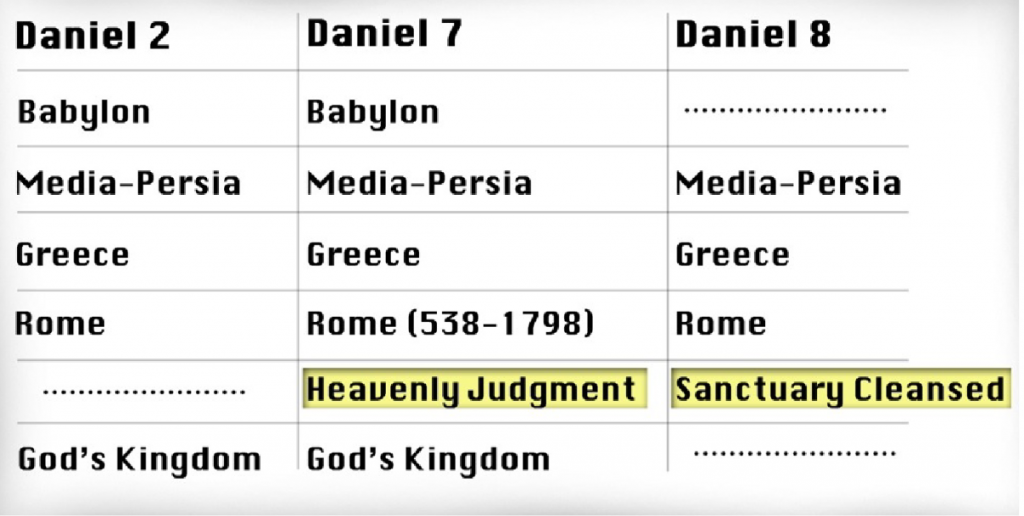 Daniel 2 and 7 are parallel chapters. In both chapters, the same progression of the 4 kingdoms is seen (Daniel 2: 31-45; 7:1-8, 15-17). Following Rome and before the setting up of God’s eternal kingdom, Daniel 7 describes a judgment scene.

“I watched till thrones were put in place, and the Ancient of Days was seated; His garment was white as snow, and the hair of His head was like pure wool. His throne was a fiery flame, its wheels a burning fire; a fiery stream issued and came forth from before Him. A thousand thousands ministered to Him; ten thousand times ten thousand stood before Him. The court (judgment) was seated, and the books were opened.” Daniel 7:9-10

“I was watching in the night visions, and behold, One like the Son of Man, coming with the clouds of heaven!
He came to the Ancient of Days, and they brought Him near before Him. Then to Him was given dominion and glory and a kingdom, that all peoples, nations, and languages should serve Him. His dominion is an everlasting dominion, which shall not pass away, and His kingdom the one which shall not be destroyed. Daniel 7:13, 14

“I was watching; and the same horn was making war against the saints, and prevailing against them, until the Ancient of Days came, and a judgment was made in favour of the saints of the Most High, and the time came for the saints to possess the kingdom.” Daniel 7:21, 22

Christ, the Son of Man has destroyed the works of the Devil (1 John 3:8). He has redeemed mankind and vindicated the righteousness of God before the universe. Jesus has promised that all who believe in His name will be vindicated in the judgement. Judgement will made in favour of the saints (holy ones) of the Most High.

“Most assuredly, I say to you, he who hears My word and believes in Him who sent Me has everlasting life, and shall not come into judgment, but has passed from death into life.” John 5:24

Daniel 7:9 The scene of the Judgment

Daniel 7:10 The Court (Judgment) was seated

As it is written: “That You may be justified in Your words, and may overcome when You are judged.” Romans 3:4

…the Ancient of Days came, and a judgment was made in favour of the saints of the Most High. Daniel 7:25

“Most assuredly, I say to you, he who hears My word and believes in Him who sent Me has everlasting life, and shall not come into judgment, but has passed from death into life.” John 5:24

But the court shall be seated, and they shall take away his dominion, to consume and destroy it forever. Daniel 7:26

When the Judgment Ends:

Give the king Your judgments, O God,
And Your righteousness to the king’s Son.
2 He will judge Your people with righteousness,
And Your poor with justice…
4 He will bring justice to the poor of the people;
He will save the children of the needy,
And will break in pieces the oppressor.  Psalm 72:1-4