“Daniel answered and said: ‘Blessed be the name of God forever and ever, to whom belong wisdom and might’ ” Daniel 2:20, ESV

Daniel chapter 2 affirms God’s sovereignty. The theme of the chapter is that God will overthrow pagan kingdoms and replace them with His own everlasting kingdom.

The Immanence of God (the God who is present with us)

The Chaldeans believed that the gods do not dwell with men.

“It is a difficult thing that the king requests, and there is no other who can tell it to the king except the gods, whose dwelling is not with flesh.” 2:15

God reveals that He is in control of human history and that He speaks to mankind through human agencies and His Son.

‘There is a God in heaven who reveals secrets, and He has made known to King Nebuchadnezzar what will be in the latter days (2:18)’.

The secret things belong unto the LORD our God: but those things which are revealed belong unto us and to our children for ever…Deuteronomy 29:29

The word is very near you, in your mouth and in your heart, that you may do it. Deuteronomy 30:14

‘There is a God in heaven who reveals secrets…’ Daniel 2:18

God gives wisdom to the wise and knowledge to the discerning. He reveals deep and hidden things; He knows what lies in darkness, and light dwells with Him. Daniel 2:21, 22

While God has prospered Daniel and his three friends in Daniel 1, here we find that King Nebuchadnezzar is troubled by a dream which he cannot remember. Though he cannot remember it, he knows that it troubled him (2:1, 3) and he demands an interpretation from ‘the magicians, the astrologers, the sorcerers, and the Chaldeans to tell the king his dreams’ (2:4).

Unfortunately, these heathen ‘wise men’ cannot tell the king his dream and therefore cannot interpret it. They plead with the king that “There is not a man on earth who can tell the king’s matter; therefore no king, lord, or ruler has ever asked such things of any magician, astrologer, or Chaldean. It is a difficult thing that the king requests, and there is no other who can tell it to the king except the gods, whose dwelling is not with flesh.” (2:10, 11)

Nebuchadnezzar’s response? He was ‘very furious and very angry and gave the command to destroy all the wise men of Babylon. So the decree went out, and they began killing the wise men; and they sought Daniel and his companions, to kill them.’ (2:12, 13)

With ‘counsel and wisdom’ (prudently and wisely) Daniel deals with the problem.

God responds by revealing the king’s dream to Daniel…Then the secret was revealed to Daniel in a night vision. Daniel 2:19

“Blessed be the name of God forever and ever, for wisdom and might are His. And He changes the times and the seasons; He removes kings and raises up kings; He gives wisdom to the wise and knowledge to those who have understanding. He reveals deep and secret things; He knows what is in the darkness, and light dwells with Him.

I thank You and praise You, O God of my fathers; You have given me wisdom and might, and have now made known to me what we asked of You, for You have made known to us the king’s demand.”

Every new revelation we have of God and from God should lead us to praise Him.

Before he explains the dream to the King, Daniel first asks that the decree against his colleagues be stayed.

He then goes before the king. The king asks him if he has the interpretation. Daniel first claims no honour for himself. He informs the king that ‘there is a God in heaven who reveals secrets, and He has made known to King Nebuchadnezzar what will be in the latter days’ (2:28)

He describes the thoughts that arose in the king’s head associated with the dream (2:29) and continues, “As for me, this secret has not been revealed to me because I have more wisdom than anyone living, but for our sakes who make known the interpretation to the king, and that you may know the thoughts of your heart.” (2:30) 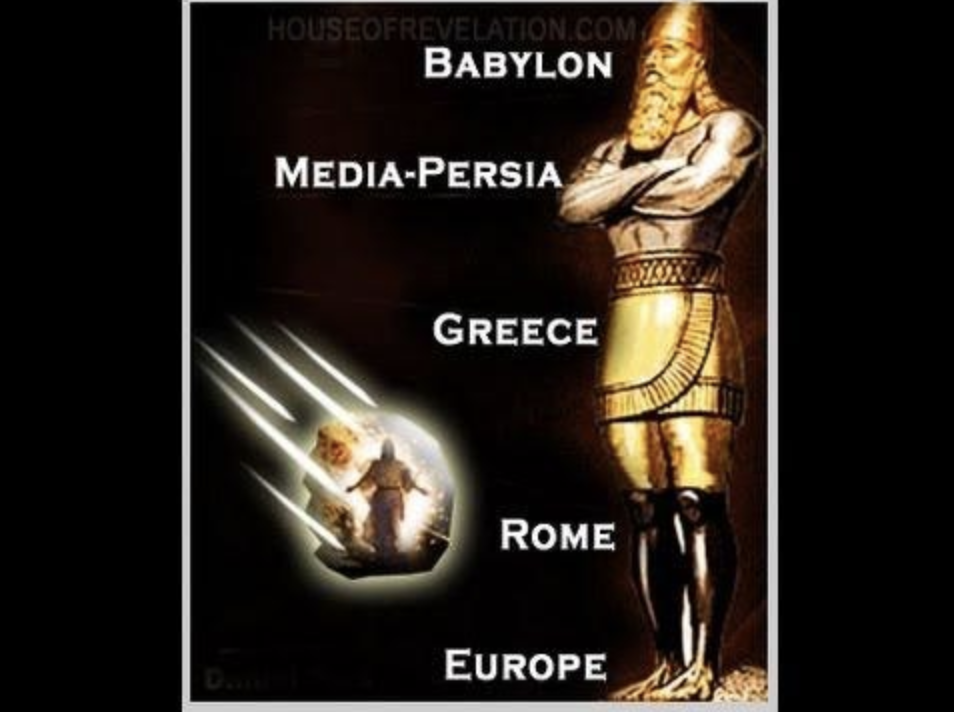 The picture above represents the dream seen by Nebuchadnezzar and its interpretation. Though Rome ceased to be an empire, it continued in the nation states of Europe as a combination of Church (the Roman church) and State (the Holy Roman Empire). The Roman church itself wielded great political power.

“The dream is certain, and its interpretation is sure.” Daniel 2:45

History confirms this and therefore we have a sure and certain hope. We live in the times when ‘the God of heaven will set up a kingdom which shall never be destroyed; and the kingdom shall not be left to other people; it shall break in pieces and consume all these kingdoms, and it shall stand forever.’ (2:44)

Some interpreters describe the stone as the coming of Christ as Messiah. But Daniel tells us that the stone will consume all other kingdoms. The book of Revelation describes this as happening at Christ’s Second Coming.

‘Then the seventh angel sounded: And there were loud voices in heaven, saying, “The kingdoms of this world have become the kingdoms of our Lord and of His Christ, and He shall reign forever and ever!”’ Revelation 11:15

The King Acknowledges the God of Daniel: Daniel 2:46-47

Then King Nebuchadnezzar fell on his face, prostrate before Daniel, and commanded that they should present an offering and incense to him.  The king answered Daniel, and said, “Truly your God is the God of gods, the Lord of kings, and a revealer of secrets, since you could reveal this secret.”

Then the king promoted Daniel and gave him many great gifts; and he made him ruler over the whole province of Babylon, and chief administrator over all the wise men of Babylon. Also Daniel petitioned the king, and he set Shadrach, Meshach, and Abed-Nego over the affairs of the province of Babylon; but Daniel sat in the gate of the king.

Nebuchadnezzar was convinced that he was the architect of his greatness and power. His subjects attributed to him eternal life…“O king, live forever!” (2:4).  But God uses a dream and his faithful servants to  inform this heathen king that the God of heaven (Yahweh) is the sovereign LORD and rules over the affairs of men.

Your kingdom is not the result of your own doing. Rather, “God of heaven has given you the kingdom, the power, and the might, and the glory” (2:37).

Whenever we are tempted to seek ‘great things for ourselves’ (for the heart is desperately wicked and deceitful), let us remember the sovereign God of heaven who is in charge of the affairs of men ‘whether they know him or not’ (Isaiah 45:4, 5), and let us humble ourselves under His mighty hand.

‘The power exercised by every ruler on the earth is Heaven-imparted; and upon his use of the power thus bestowed, his success depends. To each the word of the divine Watcher is, “I girded thee, though thou hast not known Me.” Isaiah 45:5. And to each the words spoken to Nebuchadnezzar of old are the lesson of life: “Break off thy sins by righteousness, and thine iniquities by showing mercy to the poor: if it may be a lengthening of thy tranquillity.” Daniel 4:27.

To understand these things,—to understand that “righteousness exalteth a nation;” that “the throne is established by righteousness,” and “upheld by mercy;” to recognize the outworking of these principles in the manifestation of His power who “removes kings, and sets up kings,”— this is to understand the philosophy of history. Proverbs 14:34; 16:12; Proverbs 20:28; Daniel 2:21.

In the word of God only is this clearly set forth. Here it is shown that the strength of nations, as of individuals, is not found in the opportunities or facilities that appear to make them invincible; it is not found in their boasted greatness. It is measured by the fidelity with which they fulfil God’s purpose.’ Prophets and Kings: 502

All the kings of the earth shall praise You, O Lord, when they hear the words of Your mouth.
Yes, they shall sing of the ways of the Lord,  for great is the glory of the Lord. Psalm 138:4, 5